The Women’s Auxiliary of the German Society of Pennsylvania

By Bettina Hess, Librarian, The German Society of Pennsylvania 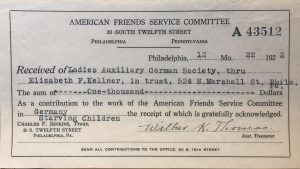 The German Society of Pennsylvania was founded in 1764 to aid newly arrived German-speaking immigrants to Philadelphia, but it was not until almost 150 years later that it started admitting women. In 1849, women first petitioned to join the German Society but the motion was rejected at a Board of Directors meeting without comment. It was not until 1900, when a group of women led by Antonie Ehrlich again resolved to form a women’s auxiliary that they were formally allowed to join. Although women, mostly wives and daughters of GSP members, had long been allowed to use the library, with its creation, the Auxiliary formally took over much of the work of the Society’s main mission: fundraising for charity.

The Women’s Auxiliary’s numbers grew significantly in the first few years, from 100 members at its founding, to 268 by year’s end, and over 500 by 1903. By 1910 its numbers had surpassed those of the German Society itself, which had been losing members. In fact, during the First World War, the German Society had such a hard time retaining members that president John Mayer sent a letter to the women exhorting them to encourage their husbands to join. One of the reasons for the relative success of the Women’s Auxiliary while the German Society itself struggled, was that the women stayed out of politics, limiting their involvement to the more traditional women’s role of helping the needy, first women and children of German descent in Philadelphia, and later widows and orphans in Germany during and after the First and Second World Wars. The main means of raising funds were by holding “Kaffeestunden” and the annual Christmas market, the latter a tradition that continues to this day.

During the war years, the women really proved their ability to get things done. The basement of the building on Spring Garden Street was turned into a sewing room, with thousands of items of clothing being made and collected to be sent overseas. A ledger in the collection records the skeins of wool that were distributed to individuals and the number of hand knitted hats, sweaters and scarves with which they returned. Thousands of dollars were also sent to starving Germans through Quaker groups such as the American Friends Service Committee. In addition, at an annual “Weihnachtsbescherung” they distributed gift baskets of food, clothing, shoes and toys to local needy women and children.

With the advent of government-funded public assistance, the women’s charitable aid to Philadelphia’s poor decreased, and in the 1950s, the charter was changed to enable the Women’s Auxiliary to direct funds toward scholarships for German language students. In recent decades, it has also been a strong supporter of the library, with money earmarked each year for book purchases. Sadly, the Women’s Auxiliary disbanded in 2018 after 118 years in existence during which time it contributed so much to the Society in terms of running events, maintaining the historic building, and adding to its bottom line – efforts that sometimes went rather under-appreciated. In the 20th and 21st century, women’s roles have changed and younger female members did not find the notion of joining a women’s auxiliary so appealing any more. The important issue now is to find an appropriate place for female members within the German Society where their voices are heard and contributions valued.

Ready to explore? Visit collections related to this exhibit in In Her Own Right: Women's Auxiliary of the German Society of Pennsylvania (Frauen-Hilfsverein) records.