The Rise of the PCLA: Child Labor Reform in Pennsylvania

The Progressive Era reforms at the turn of the nineteenth century sought to address the abuses of industrialization and urbanization. After the Industrial Revolution in the United States, many factories, mills, and coal mines began hiring children because they could maneuver in small spaces, were easily controlled, and could be paid less. Child laborers were often subjected to dangerous working conditions, strenuous hours, and inadequate education. Early Progressive Era reformers sought to enact legislation that would place restrictions on the exploitation of child laborers, which led a number of states to minimum wages and school attendance requirements.

Amongst reformers, Pennsylvania was frequently labeled as the the worst offender and exploiter of child labor. Florence Kelley, a social and political reformer from Philadelphia, condemned the state for having the worst working conditions in the country and the greatest number of defeats of child labor reform through legislation. Jane Addams, another well-known activist and reformer, noted that there were more children employed in the manufacturing industries in Philadelphia than in all of the cotton states of the south. In 1903, Mary Harris “Mother” Jones led a rally in Kensington, Philadelphia to support striking textile workers, many of which were children, demanding a reduced work week of 55 hours and a ban on nightwork by women and children. Following the rally, Jones utilized radical publicity tactics and organized a march of children workers from Philadelphia to New York in order to gain attention from the media. In New York, Jones went so far as to put children in animal cages to symbolize the horrific working conditions these children faced on a regular basis. Jones led the march to President Roosevelt’s home in Long Island to demand legislative labor reform.

In 1904, the Pennsylvania Child Labor Committee (PCLC) was formed to lobby for legistlation promoting labor reform. Even though legislation protecting child laborers were in place, the state had a difficult time ensuring that factories were implementing the law. Many reformers were specifically dissatisfied with John C. Delaney, who was appointed as Pennsylvania Chief Factory Inspector in 1903. Though Delaney sympathized with the humanitarian concerns of labor reformers, he rarely prosecuted those who defied the established labor laws. Many accused him of being in cahoots with and protecting the interests of large factory owners.

Child labor reformers, through multiple organizations, continued to fight for the passing and enforcement of child labor laws. In 1908, The PCLC became the Pennsylvania Child Labor Association (PCLA) and local chapters were established across the state. In 1911, the PCLA launched its most ambitious campaigns in support of a bill to abolish night work for children under the age of 21 and to improve standard conditions for coal mine workers. Initially, the PCLA had difficulty obtaining sponsors for the bill and relied on State Representative Henry Walnut from Philadelphia to introduce it. Though the Walnut Bill passed the House, it died in the Senate Judiciary Special Committee. 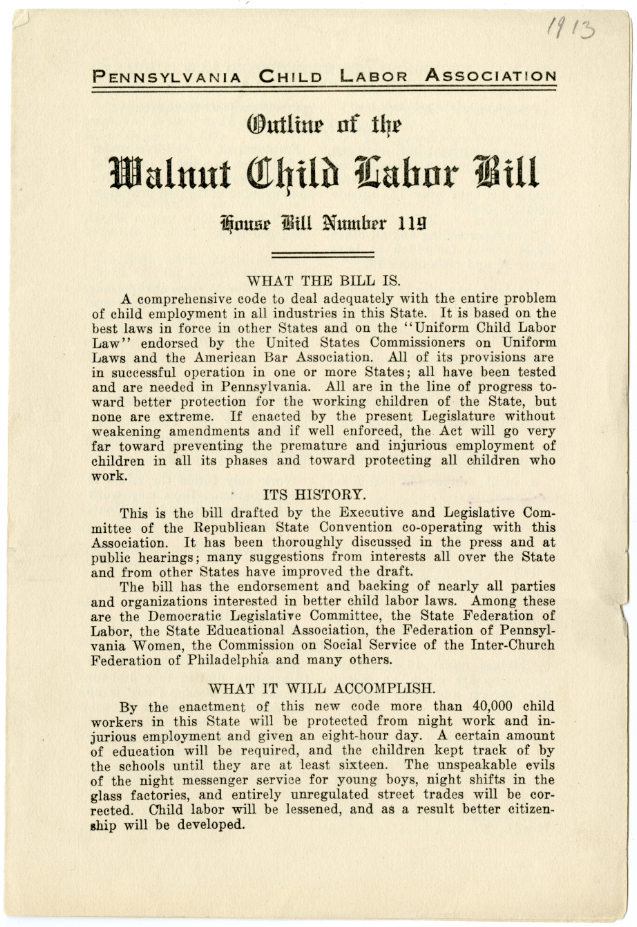 Though the Walnut Bill failed, the PCLA continued investigating the conditions of child labor and advocating for legislation to protect children from dangerous and exploitative employment. Child labor reform in Pennsylvania peaked in 1912 as the PCLA launced an investigation into Delaney as Chief Factory Inspector and his lack of enforcement of the law. The PCLA along with the Central Labor Union of Philadelphia, The Consumers’ League, and the State Federation of Labor made legal charges against Delaney and petitioned for his removal. In 1912, Delaney was dismissed from office and was temporarily replaced by C.N. Hartzell. Acknowledging the need for reform, Pennsylvania Governor John K. Tener created the Department of Labor and Industry in 1913, in which a number of PCLA members were appointed to the board.

In 1915, the PCLA successfully passed a new child labor act, which restricted children to a nine hour work day and a fifty-two hour week. The new law also placed various age restrictions on employment in various industries and mandated educational requirements for working children. Seeing an overlap of interests, the PCLA merged with the Public Education Association of Philadelphia (founded in 1880) to form the Public Education and Child Labor Association of Pennsylvania in 1915. Overall, the organization was able to promote and successfully implement the progressive ideals laid forth by earlier reformers by advocating for the protection and well-being of children.

Ready to explore? Visit collections related to this exhibit in In Her Own Right: Citizen's Committee on Public Education in Philadelphia, Pa, Records.