Suffrage in the Southwest: The Albuquerque Woman’s Club

This exhibit fleshes out material Dr. Sylvia Ramos Cruz presented as part of the "El Voto Femenino: Women and Suffrage in New Mexico" panel at the Her Own Right symposium in March 2021. Her recorded remarks can be viewed via the symposium's YouTube channel. Dr. Ramos Cruz's focus on women's suffrage in New Mexico provides a different regional perspective on women's activism in the 20th century and complements the In Her Own Right project's many Philadelphia-area, Mid-Atlantic, and East Coast materials drawn from institutions in the greater Philadelphia area.

Among the many organizations working for suffrage in New Mexico at the end of the 19th and first two decades of the 20th century, was the Albuquerque Woman’s Club (AWC). Founded in 1903 for “the betterment of women, especially morally and intellectually,” it grew steadily and, by 1914, was the largest woman’s club in the state with 180 members. As nationally, club members were predominantly Euro-American, well-to-do women with socially prominent husbands. Of the club’s first year members, six of eighty-five had Spanish surnames. Of note, the Albuquerque Woman’s Club: Fifty Years of Club History booklet states that, “…the charter member roster was kept open for six weeks to serve women both up and down the [Rio Grande] valley," and "such gracious living and home-loving women as Mesdames E. V. Chavez of Belen and Solomon Luna of Los Lunas” accepted the privilege. So did Mrs. Felix Baca (Ida) who was part of the delegation to the state’s Constitutional Convention in 1910. Solomon Luna was the most powerful Republican leader at that 1910 convention and supported school suffrage for women. Mrs. E. V. Chávez served as president of the club in 1919 when Carrie Chapman Catt came to ask Governor Larrazolo to call a special session of the legislature to act on the 19th amendment.

The Booklet, written by Maude McFie Bloom, club historian, gives a good view into the club’s activities between 1903 and 1953. However, though the club kept handwritten minutes, membership lists, and other records, the thoroughness of the minutes depended on the recording secretary for that term. One, “who shall remain nameless, was a fanatic for brevity.” Additionally, there were years, such as those between 1917 and 1928, when little of the business of the organization went into the minutes. Interestingly, though many members were among the most active suffragists in the state, there is only one mention of suffrage. That occurred in 1910, when a delegation from the AWC attended the territorial constitutional convention. The women were “armed with several strong suggestions about schools, child welfare and one on Woman’s Suffrage.” 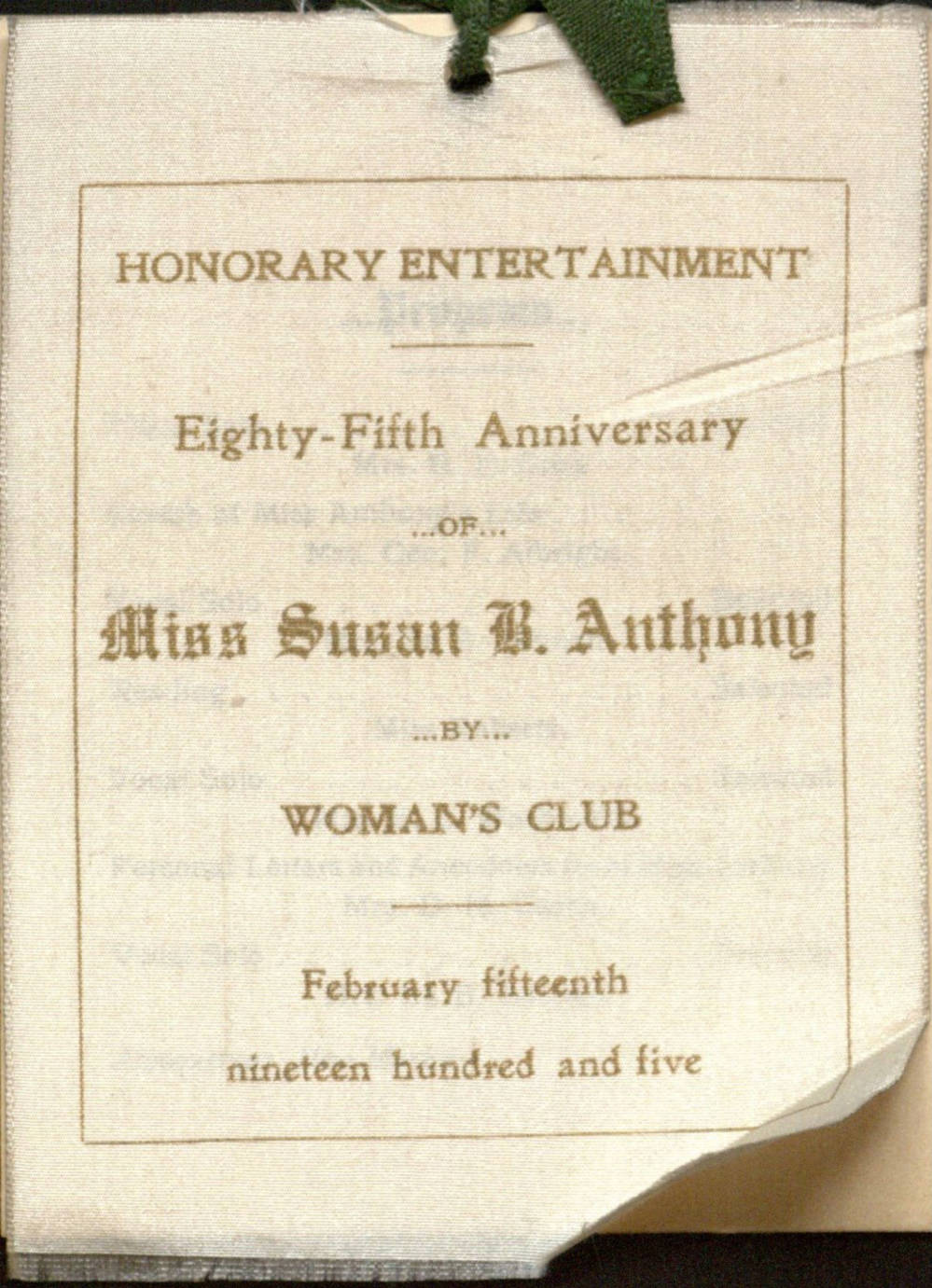 Nevertheless, the booklet presents a panorama of club activities, turmoil, travails, and triumphs over those fifty years. It shows how the organization grew from one whose initial impulse was the elevation of women’s minds to an activist force that worked for the betterment of all lives in Albuquerque, and the state. It continued to do so until 2013 when it disbanded due to diminishing membership after one hundred ten years of continuous service.

That inaugural year they tackled the “iniquitous Red Light District,” set up shelves full of “good literature for children” in the Commercial building where all children could access them, activated for a YMCA, and provided a pauper’s plot at the cemetery for “the poverty stricken who die here.” They continued to tend the plot and, in 1917, heckled Mayor Westerfield at a public event because “the city had not yet paid its half of the enlarged Pauper’s Field.”

They also printed the first club calendar with the motto, “Our mental attitude today decides our success tomorrow,” selected a study course on Japan and Russia, created a new Philanthropic department, and employed Professor Krebs “as choir instructor at a salary of $5.00 per month.” Those $5 were well-spent, as the club’s choir became quite celebrated.

Concern about the debt on the clubhouse, built in 1907 at 618 West Gold Avenue, featured prominently over several years. They held art sales, whist parties, classes and lectures by distinguished speakers, rented the club space for church activities, put on plays, sold Ladies Home Journal and picture postcards of scenic New Mexico, on commission, among other activities to pay off the $8500 they had borrowed at 8% interest. Finally, Friday September 17, 1948 the “abominable mortgage was burned.”

As the welfare of children was always uppermost in their minds, they “studied every phase of child life,” and, over the years, campaigned for and/or established programs that benefitted children. Some of these were a state child welfare program, a girl’s reformatory school, supervised playgrounds for children, and a scholarship for under-privileged girls in the Frances Willard Boarding School. They also funded and staffed the Kent Day Nursery for working mothers, conducted well-baby visits to educate mothers on proper hygiene and care of newborns and children, sponsored a Nursery at the annual state fair (that continued for 12 years), and sponsored the Better Baby Contest at the State Fair in 1914. This latter activity was sparked by the interest many members had in the eugenics movement, which was at its height. When they saw that big money prizes were given to prize cattle, sheep and hogs rather than to prize babies, they “had a series of fits,” according to one newspaper. That brought about change. The premium list was revised, and the winning baby was guaranteed a solid bank account. Babies in the hundreds, from every nook and corner of the state, were expected to compete. On the last day of the Fair, the front runner in the contest was a Native American baby from Sandia Pueblo. The Albuquerque Morning Journal wrote, “He is one hundred percent fine and assays all metal.”

For years, women club members, including the women of the AWC, worked for the improvement of their communities and, in doing so, earned the respect of all citizens. Gradually they convinced the populace and legislators that women casting ballots would benefit all. At the Industrial Day parade that closed the State fair in 1914, women’s clubs marched in the third division which also had a women’s suffrage float. A 28-second snippet of film in the Albuquerque Museum photo archives shows enthusiastic crowds lining the street as cars full of women sporting “WCTU” (Woman’s Christian Temperance Union) and “Votes for Women” signs drove by. Whichever baby won the contest that year followed them in the “Better Babies” float, along with other fourth division marchers.

On the eve of the suffrage vote at the special session of the NM legislature in 1920, the Estancia News Herald published a list of accomplishments women in public life in New Mexico had achieved by 1919. Among these were: raised age of consent from 10 to 14 years old, community property rights for wives, school suffrage for women, creation of juvenile courts, provisions for the care of dependent and neglected children, creation of child welfare and girl’s welfare Boards, passage of the Prohibition Amendment, and formation of State Department of Health.

Many of the women helped found, belonged to, and/or led more than one organization. Among them were the National American Woman Suffrage Association (NAWSA), Congressional Union for Woman Suffrage (later the National Woman’s Party), WCTU, American Association of University Women, YWCA of Albuquerque, Duke City Business and Professional Women’s Club. Thus, they were in contact with and collaborated with a variety of community leaders and those relationships helped advance their social and political endeavors.

For many decades, they cared for and supported each other through personal tragedies as is shown in this passage from the booklet. “The distress was keen over hearing that an admired absentee member, Mrs. Ada Morley of Datil, was going blind and letters were to be sent to her from then on.” Ada, a rancher in Datil raising three children on her own, regularly traveled the one hundred forty miles from her ranch to Albuquerque to participate in meetings and community activities the club sponsored.

Hundreds of women in New Mexico, including AWC members, worked for woman suffrage. They educated themselves and learned to debate and speak in public at club meetings, brought their cause to the public, wrote hundreds of pro-suffrage letters to newspapers, state, and national legislators, put together floats and held parades, all for the cause they espoused for forty-six years. Some, like Cora Kellam, traveled back and forth by train several times to speak with their elected officials in Washington D.C. At the White House in 1918, she said to President Wilson, “Mr. President, we, women of the West, are growing very restless indeed waiting for the long-delayed passage of the Federal Suffrage Amendment.” Women in New Mexico and other states “are eagerly awaiting [sic] for action on this measure in the Senate. Won’t you help us?” To which the President responded, “I will. I will do all I can.” Many New Mexico suffragists are recognized in the History of Woman Suffrage, Volume 6. Ten are AWC members. They are Mrs. R. P. Barnes (Fanny Inez), Mrs. Lansing Bloom (Maude McFie), Dr. Margaret Cartright, Mrs. Alfred Grunsfeld, Mrs. A. A. Kellam (Cora Armstrong), Mrs. H. F. LaBelle, Mrs. Margaret Medler, Mrs. A. B. Stroup (Jessi M.), and Mrs. N. J. Strumquist (Anna Wilds). Of note, New Mexico’s first woman Secretary of State, Soledad Chávez Chacόn, elected in 1922 was a member of the club.

These women had strong beliefs and just as strongly held biases. Most were college educated and many were employed. They kept up with world events, scientific discoveries and new ideas. In their fervor to improve communities, they were sometimes drawn to movements later discredited or repudiated. Among these is the field of eugenics. While their work benefitted all community members then and continues to have an impact today, club women excluded many from their ranks. There were a number of clubs founded by African American women in New Mexico at that time. Among these was the Home Circle Club (originally, the Colored Women’s Federated Club in Albuquerque) established by Mrs. Lula S. Black and eight matrons in 1914. Their motto was, and still is, “Intellectual, Social and Moral uplift.” Their goals were like those of clubs gathered under the umbrella of the Greater Federation of Women’s Clubs in New Mexico. Yet, there is no mention in the booklet of awareness of or collaboration with women’s organizations active in the African American, Native American, or Asian communities in Albuquerque and surrounding areas.

As we celebrate suffragists’ accomplishments and move into the second century of women casting votes, many citizens do not yet have free access to the ballot. Universal suffrage, guaranteed to men by the 15th and to women by the 19th amendments to the US Constitution, is not yet the law of the land. It remains an unfulfilled promise.

Dr. Sylvia Ramos Cruz is inspired to write by works of art in all its forms, women’s lives, and every-day injustices. Her award-winning poems, essays and photographs appear in local and national, print, and online publications. Women’s history is a life-long interest. In 1989 she published a paper on women surgeons who, at that time, comprised 0.5% of surgeons in the United States. More recently she has written about her journeys to visit historic New Mexico women road markers. Three years ago, she began to research woman suffrage and suffragists in New Mexico. She has presented her findings at several in-person and online meetings. In December 2020, “Seven New Mexico Suffragists” was published in La Crónica de Nuevo México, Journal of the Historical Society of New Mexico. She is a retired breast surgeon, world traveler, and women’s rights activist still working to get the Equal Rights Amendment into the Constitution.

Sources, Photos, and other Readings