or, the Frederick Douglass Memorial Hospital and Training School: The Origins of Mercy-Douglass Hospital 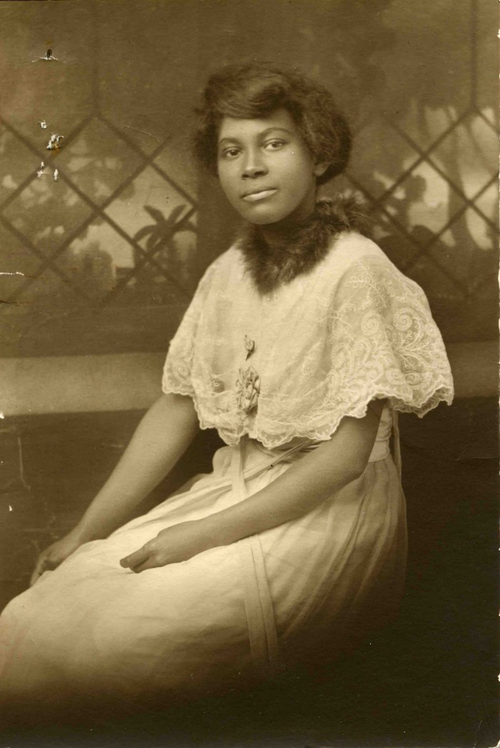 On the evening of October 31st, 1895, an enthusiastic audience gathered at the Wesley A.M.E Zion Church for the opening ceremonies of the newly established Frederick Douglass Memorial Hospital and Training School. While Philadelphia had a number of medical training schools, most refused to admit people of color. Being excluded from formal medical training, concerned community members gathered to find a way to train African Americans to be able to compete with others and find employment in the medical field.

Dr. Nathan Mossell, the first African American to graduate from the University of Pennsylvania School of Medicine in 1882, was the leading advocate for the establishment of the Frederick Douglass Memorial Hospital and Training School.. After completing post-graduate studies in London, Dr. Mossell returned to Philadelphia, where he established a private practice on Lombard Street and was elected as a member of the Philadelphia County Medical Society. A number of Mossell’s professors from the University of Pennsylvania were among the first financial contributors to the hospital and training school. Other significant financial contributors included African American Philanthropist Madame C.J. Walker and Philadelphia reformer Ms. Susan Parrish Wharton. 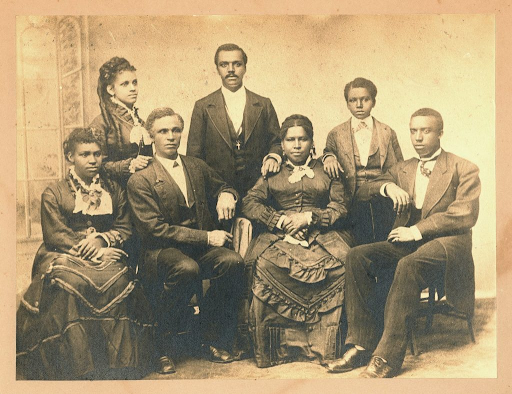 The Frederick Douglass Memorial Hospital and Training School was originally located in a house at 1512 Lombard Street and had fifteen beds. Gaining much support from the surrounding African American community, the Douglass Hospital relocated to a larger, 75-bed facility a few doors down at 1534 Lombard Street in 1909. In addition to providing affordable and accessible treatment for African American patients, the hospital also served as a place for Black doctors and nurses to complete internships and gain practical training. African American women from across the United States submitted applications to the Douglass Training School. Women eligible to attend the training school had to be “free from domestic responsibilities,” educated, in good health, and had to provide two letters of recommendation. 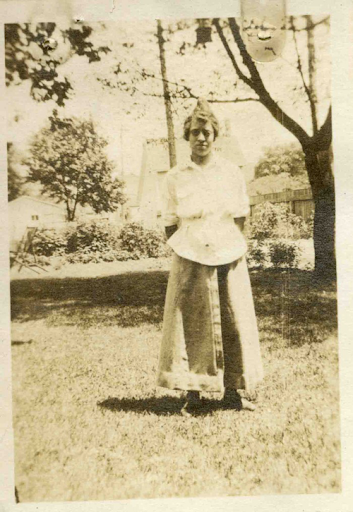 Lovice Jones. Photo courtesy of Barbara Bates Center for the Study of the History of Nursing, University of Pennsylvania School of Nursing.

Despite an increasing number of patients and support, a small group of doctors at Douglass Hospital were not in favor of the methods Dr. Mossell used to operate the facility. Dr. E.C. Howard noted that the Douglas Hospital “assumed the character of a privately managed, narrow, unprogressive institution,” failing to meet its original founding objectives. In 1905, a group of dissenting doctors organized and left Douglass Memorial to create more “progressive” hospital. They established Mercy Hospital, which opened in 1907 at 17th and Fitzwater Streets. Mercy Hospital suffered financial strain, not having sufficient funds to pay its employees or purchase necessary equipment. The 1920s brought significant difficulties for the Douglass Hospital as it struggled to meet established medical standards. The hospital was removed from the list of recognized hospitals by the Philadelphia Federation of Charities and only conditionally approved by the American College of Surgeons; it also lost its state accreditation for nursing. 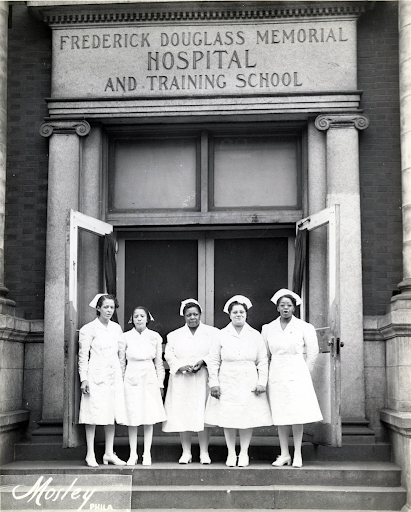 Despite losing these certifications, Douglass Hospital and training school continued its operations. Meanwhile, Mercy Hospital was improving, meeting its financial needs through successful fundraising drives. Motivated by serious financial strains during the Great Depression, a merger between Mercy and Douglass hospitals was suggested, but Mercy Hospital rejected the merger, concerned it would ruin their credentials. In 1947, a joint committee on the Mercy, Douglass Hospitals conducted a survey and concluded that neither institution could survive on its own. In 1948, Mercy agreed to merge with Douglass, both committed to the idea of effective, accessible, and quality community health care. The merger established the Mercy-Douglass Hospital on Woodland Avenue in West Philadelphia. While the merger resolved the immediate problems experienced by both hospitals, the school recessed from 1957-1958, reopened in 1959, and graduated its last class in 1960. The Mercy-Douglass Hospital closed in 1973 after decades of financial strife and internal debate. Despite these conflicts, the Mercy-Douglass Hospital succeeded in training hundreds of African American doctors and nurses, many of whom would play an instrumental role in the desegregation of health care in Pennsylvania. 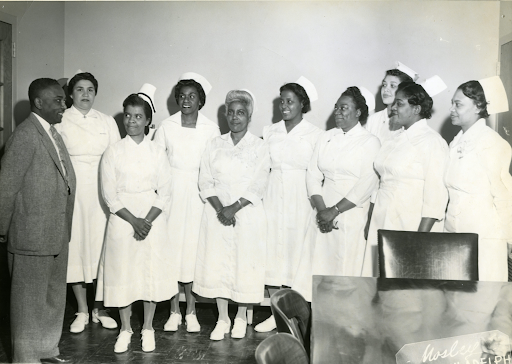 Photo courtesy of Barbara Bates Center for the Study of the History of Nursing, University of Pennsylvania School of Nursing.

Ready to explore? Visit collections related to this exhibit in In Her Own Right: Mercy Douglass Hospital records, MC78