Medical women who constructed identities for themselves as knowledgeable professionals were often elite white women. Explore how different groups of women used ideas such as efficiency and respectability to advance their careers and, in the case of African American women, their race.

Founded in 1850 as the Female Medical College of Pennsylvania, the Woman’s Medical College of Pennsylvania was one of the first institutions in the nations founded specifically to provide women with a medical education. Beginning in 1876, alumnae gathered each year to present papers and report on their activities. Graduates saw it as their duty as enlightened American women to uplift women in other parts of the world—particularly India, where the phenomenon of “child brides” was especially concerning. Less prominently featured, but still included, are arguments that attribute racial and class disparities to biological factors. 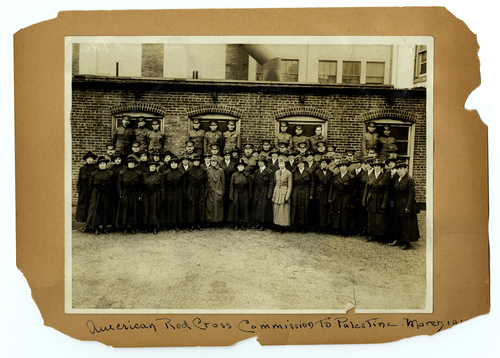 In 1918, Edith Madeira traveled abroad to serve as chief nurse for the American Red Cross Commission to Palestine. Her papers show how women negotiated a place they were not supposed to be—the front lines of war—in a profession that was not always recognized as such—nursing. In addition to commentary on the war, Madeira’s writing is replete with observations on Palestinian natives hired to work in the hospital, Armenian refugees, Africans, and others. In relation to these groups, she saw herself as a benevolent helper armed with the gifts of civilization, efficiency, and professionalism.

African American women who trained as nurses at Mercy Hospital and Frederick Douglass Hospital (founded in 1907 and 1895, respectively) claimed these same qualities. The Mercy Douglass Hospital records consist of student records (Douglass Hospital) and daily time books (Mercy Hospital), and include applications, letters from potential students and recommenders, transcripts, and photographs. Charting age, educational and employment background, location, religion, performance, and employment after graduation, these sources document demographics of nursing students, the subjects required for training, and the qualities associated with a successful nurse. In doing so, they document the importance of respectability among African Americans in the Progressive-era medical field. Photographs in particular reveal much about the characteristics valued by the black middle class and the image they wanted to project.