At first glance, this letter from Abby Hopper Gibbons might look like just another cranky old lady complaining about that newfangled elevated train, but she’s not just any cranky old lady, as this guest post explains.

This month at the Friends Historical Library, I’ve been helping to digitize and catalog the correspondences of Abby Hopper Gibbons as part of the “In Her Own Right” project. Abby Hopper Gibbons, a Quaker abolitionist, army nurse, and prison reformer, is one of the many activists whose letters and writings are included in this project, and through reading her correspondences, I have been quickly learning not only about her work but about how it fits into the larger social and political movements going on in the world around her. 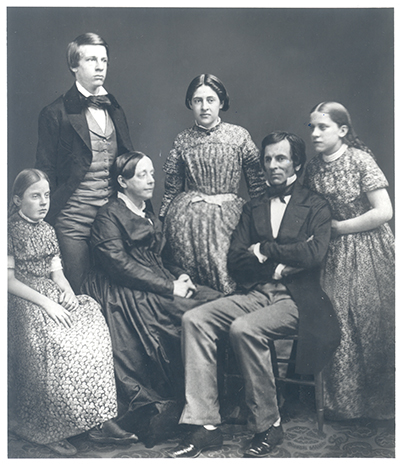 Having lived from 1801-1893, Gibbons’ long and eventful life spanned most of the nineteenth century, and her personal life as well as her activism was built on prioritizing relationships with others. This is one reason why her experiences make their way into hundreds of letters to her many family members, friends, and acquaintances.

Some of these letters are riveting: for example, she writes of her experiences working at army hospitals during the Civil War, maintaining her social service organizations such as the New York Diet Kitchen, and meeting with senators, judges, and institutional leaders to advocate for the causes she supports. Other letters are less eventful, to put it lightly – we started the collection by reading through 300 letters to just one daughter, most of which focused on neighborhood gossip, descriptions of dinner, and pretty hilarious instructions not to waste paper on letters that do not have substance. But even when reading each of these more mundane letters, I still feel that I am learning about some aspect of the history of the nineteenth century and the enormous changes to everyday American life that it brought.

One of these changes that I got to learn about through a letter was the introduction of the Elevated train, or the “El,” to New York City in 1878. This article by Lib Tietjen from the website of the Tenement Museum in New York City tells us that the new trains, though they created a large amount of noise and pollution, allowed New Yorkers to move around the city in an unprecedented way, and to spend more time interacting with people in neighborhoods other than their own. In an 1878 letter to her daughter, Sally, Gibbons mentions the Elevated, complaining that the noise and pollution are disturbing to “the community” and to the sick in particular. Written during a spell of hot summer weather that sped up and proliferated disease, the letter reveals to a modern-day reader how new modes of transportation in a rapidly-shifting nineteenth century urban landscape impacted the health and quality of life for the people of New York City. Gibbons’ reaction to this new development was to call the train system the “Hellevated,” depicting it as a demonic (or, at least, annoying) object that harmed New Yorkers more than it helped.

The introduction of the Elevated seems, at surface level, unrelated to questions of women’s activism in the nineteenth and early twentieth centuries. But as I have read more and more letters and gotten to know Gibbons better, I have continued to reflect on how her attitude toward the new trains intersects with her political beliefs and potentially complicates, or just deepens, our vision of her work. So much of her activism was related to both public health, and to making resources accessible to those who face institutional discrimination. By providing services to those who were not being resourced – such as people who were in prison or who had just gotten out of prison; people without access to food or housing; and injured or ill soldiers – Gibbons sought to help create a greater level of social equity, and access to a healthy life, by creating more equitably-distributed resources.

But what would Gibbons do if a situation arose where public health and increased accessibility to resources seemed at odds with one another, or at least complexly intertwined? The introduction of the Elevated train is just that situation. Its invention was meant to improve mobility for more New Yorkers, and to allow people to gain access to more spaces in the city – especially, as Tietjen points out, green spaces such as Central Park that were a haven for people living in crowded and polluted neighborhoods such as the Lower East Side. At the same time, its invention further polluted the air and lowered the quality of life for New Yorkers, even for those like Gibbons who had a great deal of resources and were able to leave the city for access to “country air.” How would Gibbons reconcile a general need for “public health” with a need for public transportation for those whose living spaces did not offer them a healthy environment in the first place? Who belongs to “the community” that Gibbons refers to in her letter?

Of course, Gibbons complaining in a letter to her daughter about the new trains is not the same thing as Gibbons taking a public stance on them. Rather than to claim that Gibbons is taking a political position on new inventions like the Elevated, I wanted to write this blog post to point out how the correspondences being digitized for In Her Own Right are related to these large questions about social and political activism, even when they aren’t explicitly about those topics. A letter such as this one won’t be ranked “high priority for transcription” when I catalog it, but its existence in the database will hopefully provide another opportunity for researchers to notice how Gibbons’ (many, many) comments about ordinary, daily life reflect the underlying issues this project aims to explore.

Ready to explore? Visit collections related to this exhibit in In Her Own Right: Abby Hopper Gibbons Papers.